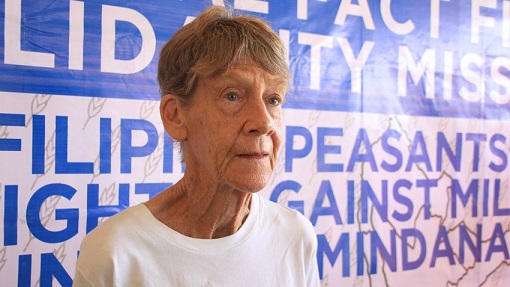 The organisation I belong to is Pax Christi Australia. It is part of the international Christian peace movement Pax Christi International, based in Brussels, which has consultancy status at the UN.

No doubt her crime is having participated in a farmer-based international fact-finding mission in Mindanao, which was concerned with the impacts of Martial Law on the local people – both Indigenous and peasants.

Sr. Patricia who is 71 has given her lift to the work of justice and peace and protesting the abuse of human rights. Her basic rights to due process, to know the reason for her arrest, and the right to legal assistance, have been violated.

Pax Christi Australia, and affiliate groups, calls for her immediate release so that she can continue her excellent work within the Church and with Filipino farmers. She is not a threat. She has been and continues to advocate for peace with justice.

We urge you to make our views known through your various diplomatic channels. This treatment of an Australian citizen who has done nothing wrong but concern herself with the poor and disenfranchised cannot be tolerated.

With peace and good wishes