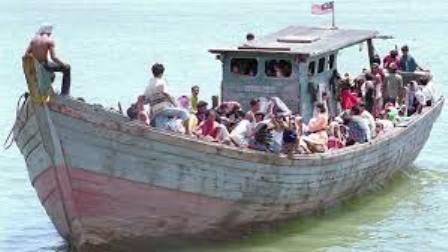 Everyone has the right to live in peace, with justice and equality, AND THAT INCLUDES ALL ASYLUM SEEKERS.
By declaring war on refugees, the Australian Government is alienating and dehumanising people who come to our country seeking the help we promised sixty years ago when the Menzies Coalition Government signed the United Nations Refugee Convention.

• close detention centres, on shore and off shore

• house asylum seekers in the community

War causes refugees - 80% of refugees are women and children. We condemn terrorism, by any person, group or government, but war is not a solution. Many of us believe we should reject all forms of violence. Australia is now out of the Iraq occupation and the Afghanistan War, where many refugees come from. Millions of Syrian people are dis¬placed right now. Now we must make Australia really help reduce the level of conflict which makes people flee their countries looking for protection. This means reducing the dangerous tension between the United States, China and Japan. It means addressing the terrible repression in the Philippines, and Sri Lanka.

Government policy brutalises children, by locking them up indefinitely in inappropriate facilities. Not knowing the term of your imprisonment induces anxiety, depression and self-harm, yet Government policy subjects over a thou¬sand children - and more adults - to this psychological cruelty.

After the deadly violence against refugees on Manus Island, this has to stop!

• vigorous response to climate change to do justice to future generations

• oppose the threat to civil liberties in anti-terrorism laws.

Australian policy now promotes greater inequality - Aboriginal and Torres Strait Islander people h ave less rights than others under the NT Intervention, Muslims are demonised, single parents with young children are forced onto poverty-level NewStart, women's wages are much less than male wages, women face their old age with significantly less than men, workers' rights to organise and bargain are under attack, jobs are being wiped out. Yet government generously subsidises the superannuation, health insurance and private schools of the wealthy.

• a caring society instead of one of winners and losers!

• raise our voices for equality and fairness in the lead up to the May Budget!