This is the statement on the Asylum Seekers issue (edited and sent by Abp.Douglas Young, pictured): 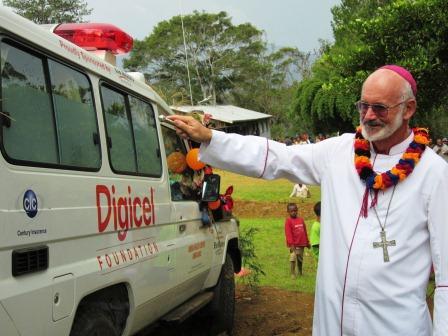 The Catholic Bishops Conference is appalled to hear of recent disturbances at the Manus Island detention centre resulting in death and injury for the asylum seekers. We wish to convey our sincerest condolences to the family of the Iranian man who lost his life and our solidarity with those who appear to be the victims of violence.
The CBC has consistently spoken against off shore processing in PNG of asylum seekers who are seeking asylum in Australia.

In statements on this issue in recent years the bishops have called for a truly humane response to those fleeing danger in their home country.

When the Manus detention centre was reopened in the context of a deal with the Australian government the CBC protested in the strongest terms.

We questioned how it could be right, in the light of the PNG Constitution's protection of freedom (section 42), to bring into our country and imprison people who have not broken our laws.

We were concerned that the rhetoric of a righteous campaign against people smugglers actually seemed to be more a question of political convenience. We were offended that settlement in PNG was presented in such a negative light so as to act as a deterrent to asylum seekers. We noted that" according to a report from the United Nations High Commission for Refugees, arrangements for the Manus Island Regional Processing Centre do not meet international protection standards, and the present situation on Manus is likely to lead to increased levels of psychosocial harm." This unheeded warning now seems to be proven all too true.

And so we repeat again out respectful encouragement to Australia "to find a more humane solution to people seeking asylum in their country. Asylum seekers are human beings who deserve respect and recognition of their dignity."

Detaining people against their will in PNG, even if it "works" as a deterrent is not a just solution worthy of a great nation otherwise proud of its human rights record. It clearly places an intolerable strain on the capacity of PNG to manage, and might lead to even more deaths, injury and trauma. Close the centre and manage the problem in Australia.