"I was brought up as a Protestant, probably with more inherited prejudices than most non-Catholics of these days.  My parents were Anglican and taught me the Angelican faith. My 'broad-minded' protestant teachers taught me to dislike the Catholic Church intensely. I later tried Protestantism in various other forms, and it is some thirty years since, in God's providence, I became a Catholic. As for the 'open, free, sincere worship' of a Protestant Church, I tasted it, but for me it proved in the end to be not only open, but empty; it was altogether too free from God's prescriptions."

Eventually, Leslie became a priest of the Missionaries of the Sacred Heart.

In 1928, Fr. Rumble began a one-hour 'Question Box' program on 2SM Sydney, N.S.W. radio on Sunday evenings that was heard all over Australia and New Zealand. For five years he answered questions on every subject imaginable that had been written to him from all over that part of the globe. His first show began with a classic introduction:

"Good evening, listeners all. For some time I have been promising to give a session dealing with questions of religion and morality, in which the listeners themselves should decide what is of interest to them. Such a session will commence next Sunday evening, and I invite you to send in any questions you wish on these subjects . . . So now I invite you, non-Catholics above all, to send in any questions you wish on religion, or morality, or the Catholic Church, and I shall explain exactly the Catholic position, and give the reasons for it. In fact I almost demand those questions. Many hard things have been said, and are still being said, about the Catholic Church, though no criminal, has been so abused, that she has a right to be heard. I do not ask that you give your name and address. A nom de plume will do. Call yourself Voltaire, Confucius, X.Y.Z., what you like, so long as you give indication enough to recognize your answer."

"By the summer of 1937, the first edition of Radio Replies was already in print in Australia, financed by Rt. Rev. Monsignor James Meany, P.P. - the director of Station 2SM of whom I am greatly indebted."

"I have often been mistaken, as most men at times. And it is precisely to make sure that I will not be mistaken in the supremely important matter of religion that I cling to a Church which cannot be mistaken, but must be right where I might be wrong. God knew that so many sincere men would make mistakes that He deliberately established an infallible Church to preserve them from error where it was most important that they should not go wrong." 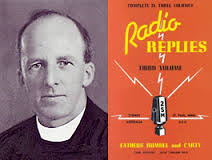 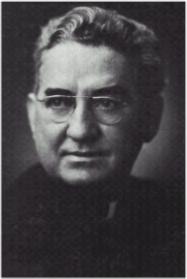 I broadcast my radio program, the Catholic Radio Hour,  from St. Paul, Minnesota.

I was also carrying on as a Catholic Campaigner for Christ, the Apostolate to the man in the street through the medium of my trailer and loud-speaking system. In the distribution of pamphlets and books on the Catholic Faith, Radio Replies proved the most talked of book carried in my trailer display of Catholic literature. As many of us street preachers have learned, it is not so much what you say over the microphone in answer to questions from open air listeners, but what you get into their hands to read. The questions Fr. Rumble had to answer on the other side of the planet are same the questions I had to answer before friendly and hostile audiences throughout my summer campaign."

I realized that this priest in Australia was doing exactly the same work I was doing here in St. Paul. Because of the success of his book, plus the delay in getting copies from Sydney and the prohibitive cost of the book on this side of the universe, I got in contact with him to publish a cheap American edition.

It doesn't take long for the imagination to start thinking about how much we could actually do. We began the Radio Replies Press Society Publishing Company, finished the American edition of what was to be the first volume of Radio Replies, recieved the necessary imprimatur, and Msgr. Fulton J. Sheen agreed to write a preface. About a year after the publication of the first edition in Australia, we had the American edition out and in people's hands.

The book turned into a phenomena. Letters began pouring into my office from every corner of the United States; Protestant Publishing Houses are requesting copies for distribution to Protestant Seminaries; a few Catholic Seminaries have adopted it as an official textbook - and I had still never met Dr. Rumble in person.

To keep a long story short, we finally got a chance to meet, published volumes two and three of Radio Replies, printed a set of ten booklets on subjects people most often asked about, and a few other pamphlets on subjects of interest to us.

Biographies compiled from the introductions to Radio Replies, volumes 1, 2 and 3.