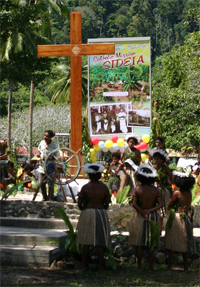 Over the next few months there will be a number of celebrations to mark the 75th anniversary of the foundation of the Mission of Eastern Papua - today the Diocese of Alotau, Papua New Guinea.
On April 22nd 1932, Father Francis Lyons MSC, accompanied by a group pf lay missionaries from Yule Island: Camillo Loula and Basilia Obi, together with her husband, Solomon, and their two young children, and a young man, Edimondo, dropped anchor in a small bay on Sideia Island in Eastern Papua. Their quiet arrival marked the beginning of the Mission of the Australian MSC Province in what is today the Milne Bay Province of Papua New Guinea.

The islands of Eastern Papua were at that time part of the Vicariate Apostolic of Yule Island (entrusted to the care of the French MSC Province) but had been rarely visited by Catholic Missionaries. Protestant Missions were already well established on some of the islands. The first attempt at the evangelization of New Guinea had, in fact, been made in Eastern Papua, on Woodlark Island. In 1852 Italian missionaries of the Society of Foreign Missions of Milan (PIME) started a mission there but after a few years were forced to withdraw. A few years later the Missionaries of the Sacred Heart were able to establish a permanent mission in Rabaul in 1882 and thus begin the work of the evangelization of the New Guinea islands. Soon after this another foundation was made at Yule Island in Papua. Although the Yule Island Mission was a work of the French Province, young Australian MSC were also working in the mission, especially in the administrative capital of Port Moresby.

Then in 1929, the Holy See entrusted the Mission of Eastern Papua to the Australian Province – its first foreign mission, although Australian MSC had been working among the Aboriginal people of the Northern Territory for many years. In 1930 Father John Doyle MSC visited Samarai to investigate the possibilities for a new missionary foundation. It was decided to make the first foundation on the island of Sideia. Initially the new mission remained part of the Vicariate Apostolic of Yule Island, under Bishop Alain de Boismenu MSC.

The mission slowly spread to other islands. When the Japanese invaded Milne Bay in 1942 mission stations were already established on the islands of Basilaki and Samarai, and in the Trobriand Islands, as well as on the mainland at Ladava. OLSH Sisters had also joined the MSC. The war years witnessed the complete destruction of much of the mission. Though the war years brought great material destruction and many setbacks, the local people – many of them only school children - not only remained loyal to their faith but also displayed zeal and initiative in finding ways to preserve and even spread their faith (as an example: one boy had 33 baptisms to his credit!).

In 1944 the first missionaries were able to return to Sideia and begin the re-construction of the mission. Because the mission consists of so many isolated islands, boats are essential and some of these were actually built on the missions themselves. In 1951 the mission was erected as a separate Prefecture Apostolic with Monsignor John Doyle MSC as the first Prefect Apostolic. In 1957 the mission was raised to the status of a Vicariate and Monsignor Doyle was ordained as the first bishop. In 1967, the Vicariate became the Diocese of Sideia. Two years later the first local priest was ordained: Father John Mathew Sinou MSC. In 1970 Bishop Desmond Moore MSC succeeded Bishop Doyle as the second bishop. Today Bishop Francesco Panfilo SDB is the leader of the Church in what is now the Diocese of Alotau.

On Sunday 22nd April, many MSC, along with Bishop Panfilo and many other priests and sisters together with laity from around the diocese gathered in Sideia to celebrate the anniversary of the arrival of the first MSC. The Apostolic Nuncio, Archbishop Francisco Padila was the main celebrant at the Eucharist in the old cathedral. Further celebrations are scheduled for June. These will be held in Alotau, the present centre of the diocese, on the occasion of the Feast of the Sacred Heart.