SOME SIGNIFICANT NOVEMBER DAYS FOR THE CHEVALIER FAMILY, 2019 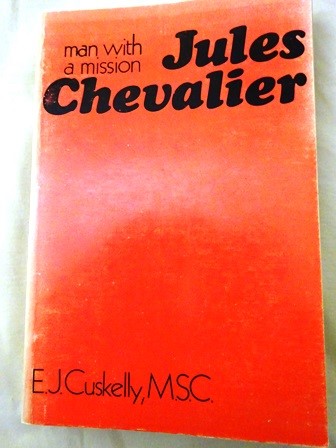 And, the beginning of the Novena to Our Lady for the founding of the congregation, November 30th

Father Karl Maria Weber was killed in the diocese of Ikela. (Zaïre at that time, now Democratic Republic of Congo). In this period of upheaval, 13 Sisters, 7 Fathers and 2 Brothers were abducted by the rebels.

The MSC Community is expelled from Issoudun and the doors of the Basilica are sealed. Father Piperon and the novices at the time find a new home in "Huize Gerra" Haaren, The Netherlands. They arrive 12 November, 1880.

Father Eugene J. Cuskelly is elected Superior General of the MSCs (1969-1981).
Cuskelly is the author of Jules Chevalier Man With a Mission, and today he is well appreciated for his response to Vatican II for all congregations to return to their roots and charism.

He re-discovered the person of Jules Chevalier for the Chevalier Family and, with his council, introduced the now globally-used-expression "Spirituality of the Heart".

Bishop Henri Verjus died in his birth-place in Oleggio, Italy. He was ordained on 1 November, 1883, and in the short period of time between his ordination and death, he established the mission on Yule Island, PNG, and was ordained Bishop at a very young age.

The FDNSC Generalate, Mother Gertrude and assistants, return to Issoudun after an exile of 17 years in Belgium.

The first 6 novices of the Handmaids of the Lord, founded by Monsignor de Boismenu, make their vows at Kubuna, Papua New Guinea.

Father Victor Jouët arrived in Rome, where he remained until he died in 1912.
He was first buried in a family tomb in Marseille, France. In 2003 his remains were transferred to the Crypt in Issoudun, where he now rests with Father Chevalier and other early founding members.

Father E. Bontemps, MSC, founder of the mission in the Gilbert Islands, today known as Kiribati, died on the island of Nonouti, Kiribati.