PROMOTING THE MISSIONARIES OF THE SACRED HEART

As we commemorated the death of Jules Chevalier yesterday, we acknowledged his mission outreach.  Nowadays some of the provinces are experiencing decline in numbers while others welcome increasing numbers.

The question arises: how do we promote the Missionaries of the Sacred Heart and their various ministries of Heart Spirituality?  And for Australia?

In the Philippines, they have produced a series of posters – but the important thing is that they feature particular individuals, highlight their ministries, highlight the credibility of responding to God’s call.

We include four of the posters. 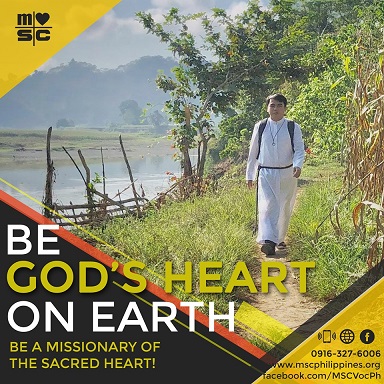 Frt. Carl Philip, MSC now serves in rural communities of San Luis, Agusan del Sur for his Pastoral Formation Year. He joins the communities in their celebration of the Liturgy of the Word. He also facilitates formation programs for the youth and altar servers. 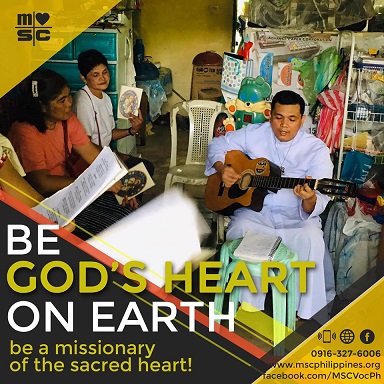 Frt. Ace Yu, MSC now serves in the Parish of St. Thomas Aquinas in Abucay, Bataan. The parish is also home to an Aeta Community. Heeding the call of Pope Francis to go to the peripheries, the parish has organized the "Katolikong Magkakapit-bahay", whereby the parish community visits houses of those who are far from the parish church to hold prayers and whereby some sacraments can also be ministered. 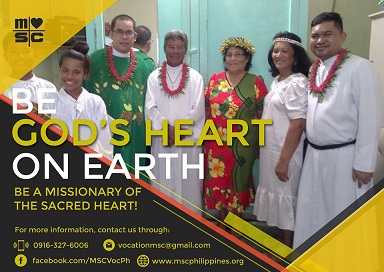 Frt. Jyrnell Salino, MSC now serves in the Apostolic Prefecture of the Marshall Islands for his Pastoral Formation Year. The image was taken before Mass presided by another Filipino MSC: Fr. Lando Cuasito, MSC. 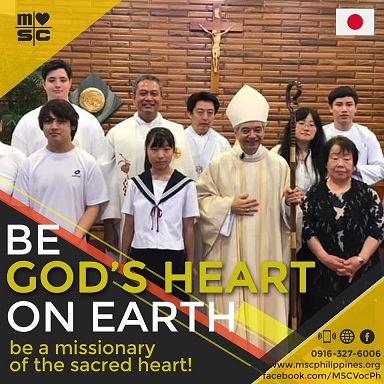 Fr. Rey Tibon has been a missionary to Japan for more than two decades. He is currently the Parish Priest of a rural parish in the Diocese of Nagoya which has been a home to a minority Japanese Catholic population and immigrants from Brazil, the Philippines, Viet Nam, and Peru.

The MSCs in Japan, who have come from Australia, the Philippines, India, and Indonesia, have been engaged in the following ministries: administration of parishes, teaching at universities, and working for immigrants' welfare among many others.