Last weekend there was a celebration in Alice Springs to commemorate 90 years of MSC presence in Central Australia. 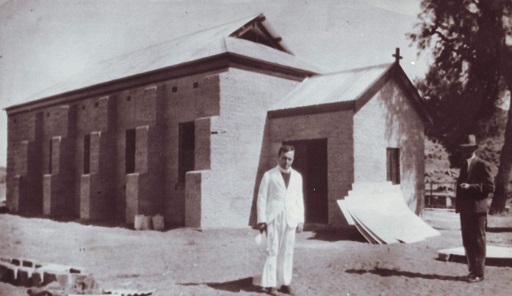 Here is an abbreviated history (yet still quite long) from the OLSH Alice Springs website.  It may be too long to read for some, but it is worth a skip read and is here for the record

We will have something later on the celebrations in Alice Springs.

Prior to 1929 the people of ‘Stuart’ were administered to by Father Clunes MSC who came up from Port Augusta, South Australia before the appointment of a resident priest.

1929 Father James Long MSC was appointed resident priest of Alice Springs, or Stuart as it was then called, In May 1929.  He was given the commission of setting up the Catholic Bush Mission.

Negotiations for land in Stuart commenced in April and on 1 July the Church was given title over Lots 53 and 54 in Hartley Street.  It was decided that concrete bricks be used for the building of the church and these were made by Father Long, Stan Cawood and an Aborigine (name unknown).

Building commenced 9 June.  The site was marked out by Joseph Kilgariff and the foundations dug.  Most of the work was done voluntarily with the brick-laying done by John Kilgariff and the plastering by Arthur Long. The first Mass took place on Sunday 8 December even though the church was not yet completed; there were 50 people present.

The first Church of Our Lady of the Sacred Heart, Alice Springs was solemnly blessed and opened by his Lordship the Bishop of Port Augusta (Right Rev. Dr. Killian), on Sunday, 15 June.

1935 Father Long departed Alice Springs and was succeeded in January by Father Patrick J. Moloney who was to establish a mission for Aboriginal people of East Arrernte. 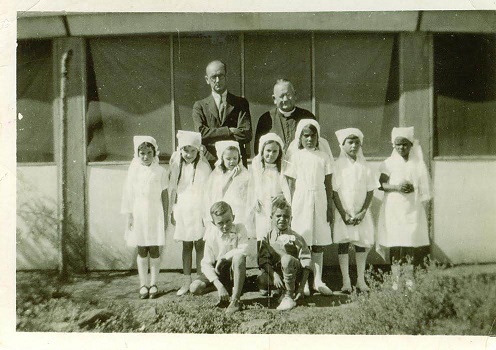 Frank McGarry arrived in Alice Springs in March 1935 to work with Father Moloney as a layman. The “Little Flower Mission”, as it was called, was established in the back yard of the presbytery. Frank McGarry has been referred to as “Australia’s Greatest Missionary”.

1936 The Northern Territory Administrator offered Father Moloney a tract of land outside the town where a water supply was located on the northern bank of Charles Creek.  425 acres (172 ha) was granted in December 1936. The mission moved there the following year. A school/church was built and a kitchen and laundry was built to the east.

In October of the same year Brother Edward Bennett MSC at 22 years of age was appointed to the Little Flower Mission.  He arrived in Alice Springs in December along with Father Wilfred Dew who was to relieve Father Moloney while he took a break for a month.  Father Dew later moved to Tennant Creek.

1938 On 5 February three OLSH Sisters arrived in Alice Springs from Kensington, NewSouth Wales.  Sister Germaine Cawood, daughter of the Government Administrator, Sister Columbanus Baker and Sister Stephanie McNally.  When the sisters arrived they were placed in quarantine for nearly three weeks as they had passed through polio infected areas. On 28 February Father George Henschke arrived from Sydney and on the same day the OLSH Sisters opened the Catholic school with 25 children attending. This first “Convent” school was built by Steve Kilgariff, Gordon Lines and Brother Ed Bennett.

Father Moloney, Br Ed Bennett and Frank McGarry vacated the presbytery (they took up residency in a two roomed stone cottage) so the nuns could use it as a convent.  Three more sisters arrived 12 April 1: Mother Adrian Smith, Sister Gemma McCullagh and Sister Consolata McKay.

Later in the year construction of a new presbytery began on Lot 53 in Hartley Street.

1940 The school was completed in time for the 1940 school year and consisted of two classrooms and a verandah.  The new presbytery was completed at about the same time.

In mid-1940, Lot 55 in Hartley Street was transferred to the Sisters of Our Lady of the Sacred Heart.

1942 A new convent was built on Lot 55.  The old convent was renovated and became the boarding house for the school. 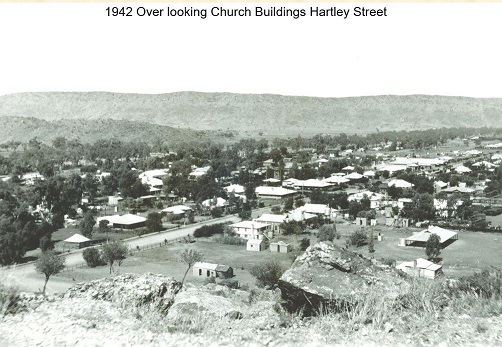 Father Eather received word the Mission must move out to Arltunga, sixty-eight miles from Alice Springs. Once a suitable area was found the Bishop applied for a Mission Lease at Arltunga and a reserve of 86 square miles was approved. The greatest worry in this area was water supply.

In September a convoy of Military trucks arrived at Arltunga carrying all from the Alice Springs Mission. Later they moved to Cross Roads Well six miles from Arltunga.

1943 A recreation hall was built on Lot 30.  With troops arriving in the town the church and other facilities could not cope with the numbers.  The hall was used for Mass on Sundays as well as for recreation.

1950 Bishop J.P O’Loughlin applied for a grant of land for a new mission site.

1952 – 53  The Catholic Church was given the rights to approximately 500 square miles at the junction of Todd and Phillipson Rivers fifty-six miles south-east  Alice Springs and the Arltunga Mission was moved to what became known as Santa Teresa on 30 June.

Name change from Little Flower Mission to Santa Teresa was made by Bishop O’Loughlin. 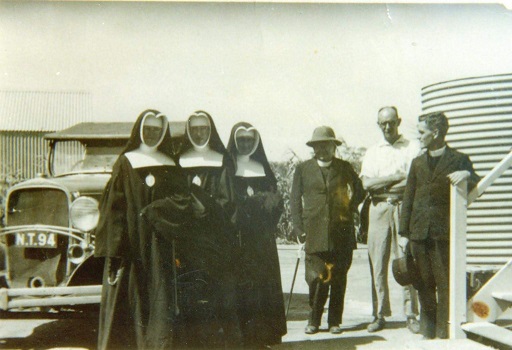 1964/5 Bishop O’Loughlin requested a Missionary of the Sacred Heart Priest, Father Dwyer, be transferred to Alice Springs from Papua New Guinea to undertake this project. Church building was not new to this priest – he had already built two churches in New Guinea although they were small compared to the one required for the larger Alice Springs Parish.

Father Jim Dwyer MSC came to the Alice Springs Parish in 1963.   He proceeded to fundraise, with his church committee, for a new church on Lot 56. His drive was amazing – he established a lottery office in the original presbytery building which was in the middle of the school grounds and fundraising went Australia wide.  Construction of a new church was underway on Lot 56 in late 1967.

Local businessman Les Loy once said, “Thank goodness he is not in business in opposition to us or we would all be broke.” Andrew McPhee was appointed by Father Dwyer and the building committee as Architect of the Catholic Church Alice Springs. Andrew noted that all the local builders were experts in concrete work and therefore he specialised in ‘off-form concrete’, a very suitable building method for the desert.

Paul and Peter Sitzler had formed a building company, Sitzler Brothers, and they were selected to build the church.  Peter and Paul were tenacious, hardworking, talented young men. Father Dwyer had been preparing for the construction of his church since his arrival. A quarry site in the Ooraminna Range, thirty miles south of the town, was selected and leased and a good stock of Central Australian red sandstone was being prepared.  Under the leadership of Parish Priest Father Jim Dwyer, the preparation for the new Church was a labour of love by parishioners who gave of their time outside their normal work and business commitments, to attend building meetings with Father Dwyer and weekends to drive south of Alice Springs in their utilities to collect the beautiful sandstone. Many townspeople loaned valuable equipment.  “1400 square yards of facing stone was required”. At times six trucks with volunteers brought in 100 tons of stone in one day.

The cutting and fashioning of the stone was done in Alice Springs on borrowed land with borrowed saws and equipment. Santa Teresa Aboriginal workers continued this work after the departure of the lay workers.  Hundreds of hours were spent by lay workers John Sullivan, Roger Vaughan and parishioners all on a volunteer basis quarrying the beautiful Ooraminna sandstone.

Lindsay Johansen was also commissioned (for the cost of materials) to construct the beautiful stained glass window on the eastern wall of the Baptismal alcove.

A small group of men were responsible for the unique stone Altar.  A huge piece of rock had been discovered at the base of Mount Connor on Curtin Springs Station and seen to the south from the Ayer’s Rock road.  Loading and bringing it into Alice Springs was a mammoth task. Paul Delahunty, with helper Brendan Heenan, accepted the task of cutting off the two ends which were used to support the larger piece whose top surface was smoothly cut.  This rock was extremely hard and many saw blades were used (Mrs Delahunty told Bishop O’Loughlin that he would need to bless the altar well as it was cursed many times during the cutting).

The Bell Tower.  Father Dwyer’s instructions were that the cross on top of the Tower had to be at least twelve inches higher than the highest part of Uncles Hotel at the time, local stories are told of a friendly rivalry between Lye Underdown and Father Dwyer.

Father Dwyer had leukemia for many years. He died the 19th March 1969 but was able to say Christmas Mass in 1968 in the new Church before it was completely finished. 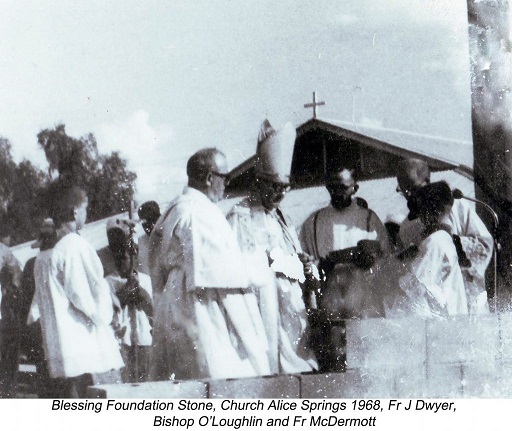 1969  Solemn Consecration of the Catholic Church to Our Lady of the Sacred Heart and Altar to the Holy Spirit by His Lordship JP O’Loughlin, Bishop of Darwin NT on 7th May and was officially opened by Cardinal Gilroy on the 11th May.

Award for Enduring Architecture (NT)   Our Lady of the Sacred Heart Catholic Church.

1974  Decision was made to complete the wall behind the altar in the church as planned by Architect Andrew McPhee.

1979 The Marist Brothers established a foundation in Alice Springs at the invitation of Parish Priest, Father Adrian Meaney, although they had been investigating the need for their presence in Alice Springs since the early 1970’s.

1983 Alice Springs Catholic High School commenced classes in the John Paul Hostel, the old church and the convent, until the building was ready at Sadadeen, on 23 July 1984 from Year 7 to Year 10.  Brother Des Hornsby was Founding Principal and Sister Margaret Kennedy OLSH, Deputy Principal.

1986  Ngkarte Mikwekenhe “Mother of God” Community was established in preparation for the papal visit to Alice Springs, the Catholic Arrernte community, with representatives from different family groups, met regularly throughout 1986.  The visit of the Pope and the commitment of this group coming together lay the foundations for the Ngkarte Mikwekenhe Community.

November 29, 1986 Pope John Paul ll visited Alice Springs and delivered his speech to the Indigenous people of Australia.  Pope John Paul reaffirmed the unique importance of the Indigenous people of Australia, and proclaimed that God’s Holy Spirit had been with them from the very beginning of their existence. “For thousands of years,” he said, “you have lived in this land and fashioned a culture that endures to this day. And during all this time, the spirit of God has been with you. “Your ‘Dreaming’ which influences your lives so strongly that, no matter what happens, you remain forever people of your culture, is your own way of touching the mystery of God’s Spirit in you and in creation.”

A mural by Wenten Rubuntja depicting the Caterpillar Dreaming and the mountain gaps around Alice Springs took pride of place behind the Pope on the stage/altar.  The painting hangs in the alcove in our Church.

A clay Coolamon was used by the Pope to dip a branch into and bless the people present during his visit.  The clay Coolamon is still used on occasions in the OLSH Church.

1990  The Arrernte Catholic community decided to incorporate their group as a non-profit organization and become formally known as Ngkarte Mikwekenhe “Mother of God” community.   They work to share their faith and to care for one another and to participate actively in decision-making within the Catholic community.

1997  OLSH Primary School and Catholic High School became one College under the direction of the Marist Brothers. Br Paul Gilchrist was the Founding Principal of Our Lady of the Sacred Heart Catholic College. 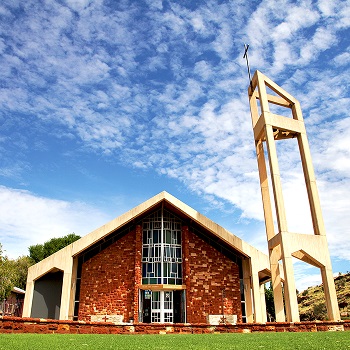 2007  3 June Farewell Mass for the Missionaries of the Sacred Heart.

The Divine Word Missionaries answered a call from the Bishop of Darwin to live, work and minister with the communities of Central Australia. This includes in a special way the indigenous peoples of Central Australia, as well as the people of many different cultures and backgrounds who have settled in Alice Springs and surrounds.