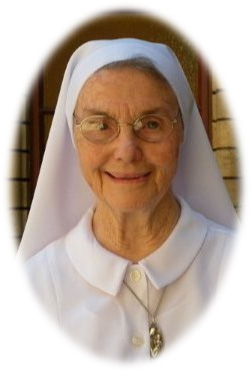 As with so many eulogies of our OLSH sisters, looking  back on long lives and ministries, there is so much history, especially of service in PNG.

Throughout her long life, in the congregation of the Daughters of Our Lady of the Sacred and before, Sr Marina always sought to serve others with justice and love. This came from her faithful life of prayer which began at her mother’s knees in her earliest years. Her first teachers of the Catholic faith were her parents, John and Mary both of whom were thoroughly imbued with this same faith as is shown by their having their home consecrated to the Sacred Heart and saying the family Rosary every night as well as their devotion to the sacraments and the Mass. This faith was transmitted to their four children, Mary, Edmond, Patricia, and Josephine.

For many years Sr Marina had a great desire to spend her life bringing the love of the Sacred Heart to the people of Papua New Guinea and this became a reality when she went there in 1955, a year after she made her final profession. She was to spend the next 51 years there and lived through many changes in the country. When she first arrived, PNG was under the administration of Australia and she experienced the move to self-government and Independence which was attained in 1975 and then the gradual changes that came about after that momentous and peaceful event.

Marina’s ministry was mainly in the field of education. She taught in primary and high schools and as a lecturer at Sacred Heart Teachers’ college at Yule Island in the late sixties. Marina spent 11 years teaching in primary schools in the Mekeo at Inauaia and Veifa’a and many years around Port Moresby in various schools.

Over the next twenty-six years Marina taught in High Schools throughout the country at Papitalai on Manus Island, Yule Island, Mainohana, Hagita and Vunapope. She was an excellent teacher, demanding much of her students and was much appreciated.

When asked to write about significant events or experiences in her life as a Daughter, Marina wrote “My most significant experiences have been during the last six years of my missionary life in Daru (in the Western Province). Here I met real poverty – people, children who were hungry, were ragged and dirty, suffering sickness silently because they didn’t have two kina to go the hospital. People rejected by their families because they were HIV or dying with AIDS. Stealing and crime were rife and living standards sub-human.”

Many of the people living on the island of Daru are refugees who have fled West Papua for fear of Indonesian rule to which they had probably objected. Marina was the first of our Sisters in PNG to officially minister to people with HIV/AIDS when she became the Diocesan AIDS Coordinator. She set up a Care Centre in Daru and sometimes met with opposition from people in the Health Department. In 2002 Marina obtained an Advanced Certificate in Counselling and Care from the PNG National AIDS Council and in 2005 did a further extension course in “Mother to Child Transmission”. For six years Marina was fully committed to this most difficult but needy mission. She was one of the early Daughters to form a community in Daru.

On her return to Australia Marina continued to give food and drink to the hungry and thirsty, to visit the sick, to bury the dead and to comfort the afflicted as she worked with the St Vincent de Paul society with the poor and lonely in the Daceyville area. Later, in her years of retirement she became more contemplative and spent her days in prayer praising God and asking assistance for all the people whom she had taught or helped in any way.

We now say farewell to a wonderful missionary and a true and devoted Daughter of Our Lady of the Sacred Heart, who has inspired so many people. Dear Marina, may you now rest in peace and joy with the God you have loved and served for so many years here on earth.