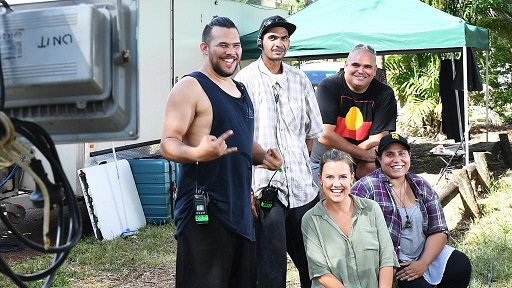 No, this is not an announcement that Fr Pat Mara is getting married!! Rather, the film. Top End Wedding is opening around Australia on Thursday May 2nd. 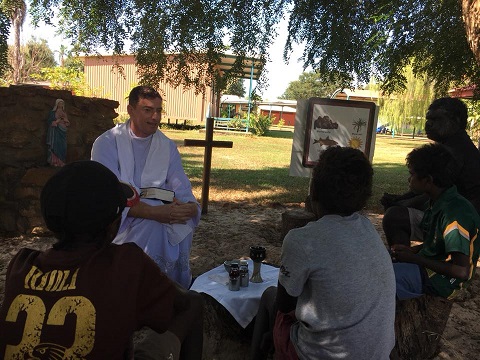 Pat has sent this report about the film-making and the involvement of Tiwi extras.  A review can be found below.

It's not often that Hollywood (or Film Australia to be more precise) comes to town, but that is the situation a little town called Wurrumiyanga on Bathurst Island, NT found itself in last year during the dry season. Bringing along a hoard of crew members, film and catering trucks, along with some popular Australian actors, the town because a hive of activity and excitement was extremely high.

There were initial visits by the directors, producers, and some others as they determined what was possible for the screenplay they were working with. They were thoroughly inspecting places of interest where filming would take place, including the beautiful old church which would be the main feature of filming on the island. A few months later, once their planning had been finalised, they began filming. 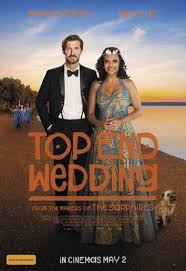 The great thing about the movie was the local involvement, with all the extras who would have small acting roles with a few lines, or those just walking in the background making up the crowd, or the strong women on the island and their famous singing which was used in the wedding ceremony. Everyone wanted to be a part of the action and it was just wonderful to see how happy and excited the town was. There were more than 200 Tiwi extras, which is a lot from a town of about 2,000.

The film crew were great to work with and very grateful for any help. My involvement was very minimal, simply providing vestments for the actor and keys to access the old church. When they returned the vestments they had been dry-cleaned and neatly folded up!

All in all it was an uplifting experience to have Wurrumiyanga featured in a major Australian film. Just a few weeks ago the grand opening was held in Darwin and many Tiwi people who were involved in the film were invited to attend. I wish the film the greatest of success and hope many go to see the film and get a little taste of the beauty of the Tiwi people and their culture.

And a review of the film from The Australian Catholic Office for Film and Broadcasting.

Most audiences will enjoy travelling to the Northern Territory for this romantic comedy – and many will probably decide that they must go for a visit.

At the Melbourne premiere of Top End Wedding, director Wayne Blair welcomed the audience by stating that this was a Romcom, a black-white Romcom. It is the brainchild of the leading actress, Miranda Tapsell, who was one of the Sapphires in the film directed also by Wayne Blair. This time she is drawing on her own personal story about growing up in the Northern Territory and the story of her mother. She co-wrote the screenplay and was one of the producers. She is very small in stature – but, obviously, quite a powerhouse.

The opening is in Adelaide, audiences are able to identify with situations and characters, Miranda Tapsell playing Lauren, an associate in a law firm run by Hampton (and Lauren’s boyfriend, Ned, Gwilym Lee, refers to her as Cruella de Ville – and she does have a Cruella grey streak in her hair). She is played by Kerry Fox, a martinet of the highest order, who steals the scenes in which she appears. But, Lauren is made a partner, goes home happy, is proposed to by Ned, accepts, and decides that she wants her mother and father to walk her down the aisle, but in the Top End.

But, that will that be too short and sweet for a popular film? So, there are quite a lot of complications which lead to both further enjoyment as well as some touring around the top end, out to Kakadu, down to Katherine and a picnic in the Gorge, scenes of Darwin and then over to the Tiwi Islands for the wedding. Once again, plenty of opportunity for making future tourist decisions to visit! 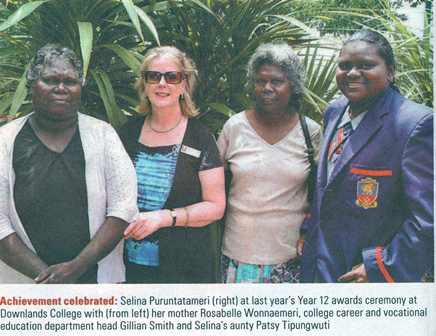 There are all kinds of humorous characters throughout the film including Lauren’s father who turns up at the airport in his pyjamas to pick them up but he is grief stricken because his wife has walked out on him and he doesn’t know where she is – and his retreating frequently to hide in a closet playing “If you leave me now…”, the song that was playing when he first met his future wife. There are also Laurne’s three close friends, full of bounce and flirty, then commandeered by Hampton, along with the Dad, to prepare for the wedding. She has a big wall chart, timeline, jobs allotted…

Poor Ned, whom we first met floundering in a court case and then being advised to give up the law, travels with Lauren in order to find her mother, but there is tension and the calling off of the wedding. And, it means that Lauren flies to the Tiwi Islands and we enjoy the visit there, the range of people, her being reunited with her mother, meeting her grandparents, everything warm and wonderful – and the wedding back on. 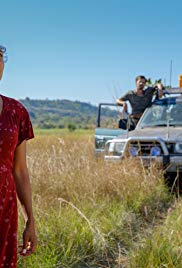 So, Ned’s mother and brother arriving, Hampton persuaded to come as well, but Dad still in the closet weeping and Ned practically dragging him out to a motorboat to get them to the church on time (but even the congregation is impatient, including the aboriginal celebrant, when they are two hours late!).

Moments of sadness and stress, many more moments of excitement, and the whole experience of joy. 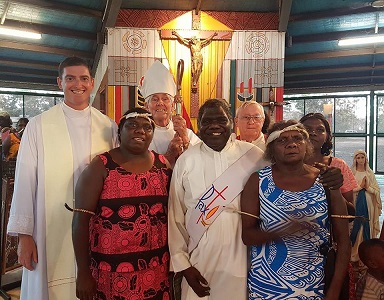