A VISIT TO THE NORTHERN TERRITORY: NOEL MANSFIELD MSC 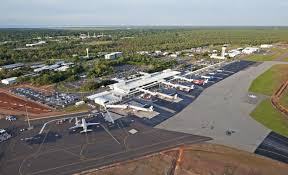 This story is a continuation of Noel's previous posting on his visit to the Kimberley for his sister, Joan's celebration of her 90th birthday.

On Tuesday, 15th, I travelled to Darwin via Kununurra. I was met at the airport by Malcolm Fyfe. It was good to catch up with him. Over the next few days I was able to travel around with him and see various places like Humpty Doo. It is a small town situated just south of the Arnhem Highway, approximately 40 km from Darwin, with a population of about 4000 people. Here Malcolm celebrated the Sunday mass with a packed church and a very lively congregation.

I wanted to meet Bishop Charles again. I had not seen him since he was ordained Bishop. Malcolm called on him and he came out on Saturday evening for more than an hour. However, I was unable to catchup up with Bp Eugene Hurley. He was away on holidays and arrived back just after I left Darwin. 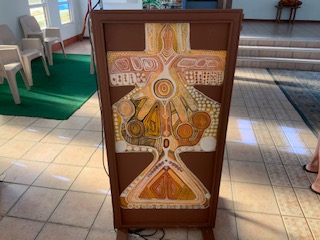 Peter Huan was in Darwin and was returning to Daly River on Thursday. So, I took the opportunity of going there with Peter even if only for a couple of days. It is about two-and-a-half-hour drive. On the way, he called in to visit a Vietnamese refugee family. They are living on temporary visas and hoping at some stage to get residency in Australia at some time in the future. In the meantime, they are making a living by growing vegetables. Peter seems to be much more at home with them than with Aborigines. After all, they ae his own people.

Daly River has been part of my MSC growing up. I have never been to this part of the country before so it was interesting to me. The river is certainly the centre of the township. The locals have always wanted to stay near the river rather than build on higher ground. The floods come in regularly but the people prefer to be near the river for fishing. This mentality is now changing. After I was there, Bishops Charles and Eugene with Malcolm and financier went to a meeting the day I left Darwin. They went there to do some business about a property but I do not know the details.

The couple of days with Peter were interesting. He does not relate easily with the locals. Only a handful of people come to Mass on Sunday in their beautiful church. I did not meet one local while I was there. We celebrated Mass together on two occasions. Peter was very glad to have a companion at his Mass. The people do not come to the weekday mass at all. 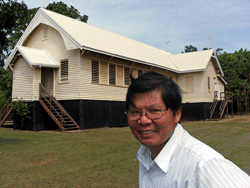 Peter took me to the spot where the Jesuits set up a mission in 1886. They celebrated the centenary and left markers to show where they had the mission. But there is no sign of a building. Jesuits stayed for about ten years and then left. I think they left in 1896. There is no sign of habitation – only photos, names and dates are on plaques about the site.

MSC’s came in 1930’s and are still there. One Jesuit once asked Fr John: What have the MSC’s done for the Aborigines? He replied: We stayed.

The church is very beautiful. The Aboriginal painting on the front of the reading stand is fascinating. It tells the story of creation to the foundation of the church. Peter has also placed a crucifix on the wall behind the altar. It is well designed by local artists. (See Pictures)

On Saturday, we headed back to Darwin. He called on the Vietnamese family on the way but they were busy. So, we spent only a couple of minutes with the husband there.

In the evening, Peter Hendriks took me to Mass at the Nightcliff parish. Julie Weber-O’Bryan was there. Great to meet her and catch up on some of her life. She still misses Tex. We were able to catch up on some old memories from Monivae days. Then Peter took me to an Indian Restaurant for a meal. The food was great but spicy hot.

On Monday, Peter Hendriks came to take me to catch the flight for Bathurst Island. Journey was pleasant. There I was met by Patrick Mara. He is known by all the people as he shops or drives around. I was glad to meet up with him. When he passed through Adelaide a few years ago, I was unable to meet him. At times he has to explain things that to him are so obvious. I do not know my way around. It is about 35 years since I was here. All the buildings look very much the same to me. 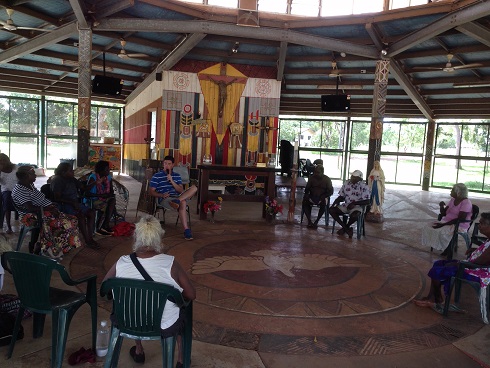 I went for a walk to see the new church. This was interesting. Photos show what I saw on the way - especially the Cathy Freeman Foundation and other buildings that you would not see anywhere else. I find this new church refreshing and beautiful in its own way. The new church is light and airy. It seems to me to be well suited to the climate, Yet the locals have some problems with it. I was to be enlightened by the locals when the Community Leaders met the next day.

At the meeting with the community leaders, that became one of the important points of discussion. They all had an opinion and were not afraid to express their ideas. They want a traditional church rather than this present structure. This Parish leaders meeting was very lively. They know what they want and say so. They want a new church in old style so that it will be respected.

Patrick ran the meeting very quietly and gently. He relates well with them. He listened to what they had to say and asked relevant questions – without imposing his ideas on them. 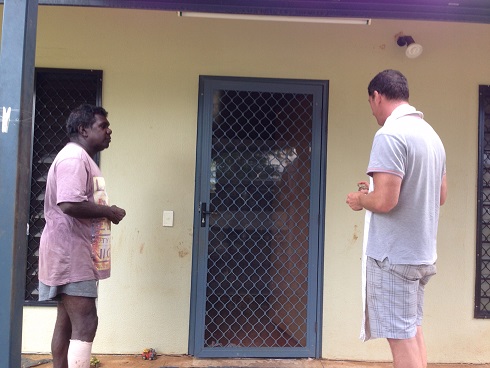 We visited the Nursing Home. The Building is much simpler than the one in Broome. This one seems to suit climate and local customs. Pat knows them all and is known by them. He introduced me to the oldest living Tiwi, Mary, who is 84.

Back in Darwin, Patrick cooked evening meal - reef and beef. Very tasty. The next morning, he dropped me off at the airport to return home.

I spent some time with Herman Kooyman while I was in Darwin. He is still making things. His latest project is making homes for birds that are one of Bishop Charles’ hobbies.

Flight was pleasant and on time. Darwin was hot but Adelaide was something else (46.6C!). From the frying pan into the fire! 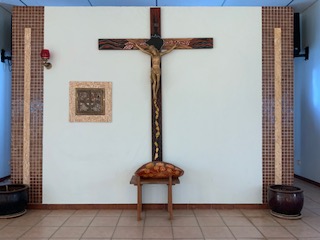