During this year we will be featuring articles on the MSC Bishops in PNG and the Pacific. 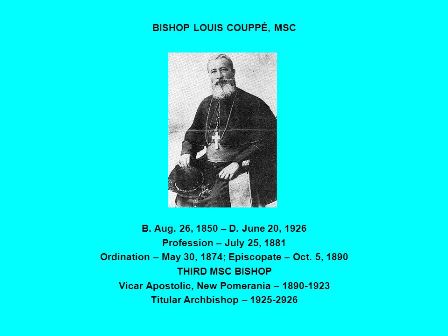 This article  by Hugh Laracy was published in Australian Dictionary of Biography, Volume 8, (MUP), 1981

Louis Couppé (1850-1926), missionary archbishop, was born on 26 August 1850 at Romorantin, department of Loir-et-Cher, France, son of Charles Couppé, locksmith, and his wife Margeurite Vinéraude, née Cougnet. Ordained in the diocese of Blois on 30 May 1874, he worked in the parish of Selles-sur-Cher before joining in 1880 the Missionaries of the Sacred Heart, recently expelled from France by the anti-clerical decrees. Couppé took his first vows in Holland in 1881 and made his final profession in Rome on 25 July 1884.

Aroused by the case of the Marquis de Rays, the Vatican appointed the Order in 1881 to evangelize the vacant vicariates of Melanesia and Micronesia. The first missionaries began work at Kokopo near Rabaul, New Britain, in 1882. Following the division of eastern New Guinea between Britain and Germany in April 1885, Melanesia was divided in 1889 into two new vicariates of New Pomerania and British New Guinea, coterminous with the new political jurisdictions.

Arriving in Sydney in January 1885 with three brothers of his Order and five nuns of the related Order of Our Lady of the Sacred Heart, Couppé was appointed by Fr Navarre to establish a house of the Order. At Cardinal Moran's request he also ministered to Botany and Randwick parishes. He landed at Yule Island, British New Guinea, in August 1886, joined Henri Verjus in exploring the headwaters of the St Joseph River and in 1889 was appointed vicar apostolic of New Pomerania. Couppé was consecrated titular bishop of Lero at Antwerp, Belgium, in 1890 and returned to his vicariate in 1892. After 1897 his jurisdiction was restricted to New Britain, New Ireland, Manus and the Marshall Islands. The latter group was withdrawn in 1905.

The population was not always receptive. In 1904 ten missionaries were killed in the Baining Mountains and in 1919 a catechist and his wife were killed there. Nor was the government always helpful. In 1889 mission work was banned because of the anti-Jesuit laws then in force in Germany and the missionaries were threatened with expulsion from New Guinea. As soon as these impediments were removed in 1890 it was ordered that the Methodist and Sacred Heart missions should occupy separate districts to avoid tensions.

When Couppé appealed, the German Foreign Office agreed that each mission should retain its existing stations whether or not they were in the territory of the other. The 'spheres of interest' policy was abandoned as impractical in 1899. There were problems, too, over land. To provide for the future growth and financing of the mission, Couppé travelled widely and bought large areas, particularly those with good anchorages. Bitter wrangles with competing claimants such as 'Queen' Emma Coe and the New Guinea Co. ensued, but these became fewer after the German government assumed direct control of New Guinea in 1899.

Couppé was plagued by patriotic sentiment. Under German pressure, his French confrères were replaced by Germans in 1904. Although he urged them to behave correctly towards the occupying force in World War I, the mission remained under official suspicion; funds from Europe were cut off and after the end of the war, until 1924, there were continual deportation threats. His mission nevertheless became largely self sufficient and its headquarters at Vunapope near Kokopo was almost a town, with schools, workshops, a hospital, an orphanage, a printing shop, a church and various religious houses.

When Couppé retired in 1923 he was administering thirty-four mission stations, a school for catechists and an indigenous order of nuns, the Daughters of Mary Immaculate. He had also converted most of the Rabaul Chinese community. He retired to St Mary's Towers at Douglas Park near Sydney, and died there on 20 July 1926, six months after being named titular archbishop of Hieropolis. He was buried at Vunapope. Couppé was 'a very tall, strong, portly, energetic man with a long black beard and, though French, has little of that nationality about him'. His energy, determination, foresight and business acumen gave the Church in the islands a good start.