This site offers memorials of OLSH Sisters who have died. Their stories are personal but also illustrate the wide history of the mission heritage of Jules Chevalier. 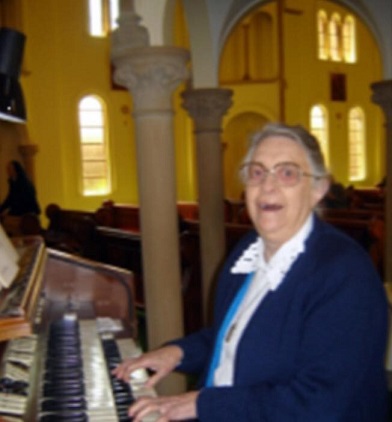 “My song will be for you, forever, You the music of my heart.
With your voice you sing within me; You, the One who knows me well. You, my joy, my life and blessing. When you call you know my name.”

On December 6 Jesus called Mona’s name and took her to Himself to sing a new song forever in heaven. Now she can truly sing, “My song will be for you, forever, you the music of my heart.”

Mona Isobel Sackley was born on 24th April 1927. She was the middle child of Edward and Mary Sackley. Her older brother, Keith, and her younger sister, Veronica have predeceased her. Mona’s father was a dairy farmer and she spent the first years of her life on farms in Albion Park, and then Avoca. Her father had served in France in the Air Force in World War 1 and as a result suffered chest complaints. Mona’s mother, Mary, was a good housekeeper and manager. Both Edward and Mary were practicing Catholics and always supported the Church. In her memories Mona wrote: “We had a good Catholic atmosphere in our family and attended Mass every Sunday, also on First Fridays and Holy Days. Our parents both taught us as much as they could from their own experience and good example.”

Growing up during the Great Depression and World War 11 affected Mona’s family as small farms were not viable, and so in 1930 the family moved to Moss Vale where her father kept a good vegetable garden and worked on local farms and with the Council. Mona noted that a few days after the attack on Pearl Harbour her father enlisted and was away for a year, while her brother, Keith, was called up and took part in the Kododa Campaign in PNG. As Mona’s Mother was not well and very worried at this time much responsibility fell on young Mona’s shoulders. Mona wrote:
“Growing up during the Great Depression and its aftermath, then the experiences at home during World War 11, gave me a sense of the value of family life, and the importance of the main things in life, eg education.”

Mona commenced school in 1933 at St Joseph’s, Moss Vale, which was run by the Dominican Sisters. She wrote in her memoirs
it was “during primary school I knew I wanted to be a nun. We had a wonderful Sister [teaching us] and I used to think I would like to be like her. Up until almost the end of 1944, [when Mona was 17], I thought I would like to be a Dominican but the thought of going to the missions made me think of entering the OLSH instead.”

Mona’s secondary schooling was at “Elm Court”, Moss Vale, where again she was taught by the Dominican Sisters. Here she completed her Intermediate Certificate in 1941. Mona’s teaching life began early as she was only 14 when she was asked by the Sisters to help in the Infants school. Having done well at this task she was then asked to teach years 3 and 4 in the Boarding School under the supervision of a Sister. She remained in this position for a further two years.

Mona entered the OLSH Novitiate at Bowral on 2nd February 1945. By then her younger sister, Veronica, was old enough to be a companion and support for her mother, and her father and brother, though not yet home, were out of danger. Mona wrote: “I have thought in later years that I was called to the Spirituality of the Heart.

My first retreat was given by Fr Goodman msc in 1945 and what he said then was the basis of my spirituality for the whole of my life.
Mona made her first profession of Vows at Bowral on 6th January 1947 and began teaching music at the Boys’ College there and playing the organ at the Parish Church. From there Mona went to Daceyville, again teaching music and being the Church organist. In 1948 Mona went to Darwin where she taught in the primary school. On January 6th 1950 Mona made her Final Profession of Vows as a Daughter of Our Lady of the Sacred Heart at Bathurst Island and the following year her dream was realized when she was sent to Papua New Guinea. Here she joined the community in Rabaul and for the next five years taught music and was the Church organist. Wherever she went and there was a church with an organ Mona played it! Her musical gifts were well used at both liturgical and social events. Concerts were a joy for Mona to prepare and organize, for the students to perform and for the delighted audiences.

We follow Mona as she moved around the OLSH communities in PNG – to Vunapope and the OLSH Teacher Training College, to St Therese’s Mission at Pililo, back to Vunapope, then to Kabaleo as Principal of St Joseph’s School, back to the Training College at Vunapope, the Sacred Heart School Rabaul, the OLSH Teachers College at Kabaleo where she was Acting and Deputy Principal and Lecturer, back to Rabaul where she was Principal of the Sacred Heart School and, as always, playing the Church organ. From 1974- 1980 Mona was a teacher and lecturer at Goroka Teachers College and OLSH Teacher College at Kabaleo.

Because of ill-health Mona returned to the Australian Province towards the end of 1980 and joined the community at Leura where she taught Catechetics in the local state school. She then taught for a year at OLSH College, Enfield in South Australia before returning to Darwin again and working at the Catholic Education Office and playing the Cathedral organ. Then it was off to Alice Springs in Central Australia, Elmore in country Victoria, Tara in outback Queensland, Bowral in the Southern Highlands and Kilburn in Adelaide. In all these places Mona continued supervising and teaching catechetics and music, working in Parish Offices, in the Adelaide Archdiocesan Archives , with the OLSH Associates, on the OLSH Vocations Committee, managing community finances - and playing the organ!

In 2007 Mona joined the Holy Family Community at Kensington. She soon took her share in preparing the liturgy and playing the beautiful Chapel Organ. As well, Mona composed the music for every Sunday’s Gospel Acclamation.

Wherever she went Mona brought with her a cheerful spirit and a sense of fun, such important ingredients in the making of community especially in the missions and in isolated areas of the apostolate.

Mona always had a great respect for education and a deep interest in many areas of life, particularly religion, liturgy, music (of course), history, and she enjoyed reading and writing. She was the editor of our very popular Province Magazine, “Home and Heart”.​Mona had a fund of general knowledge and the ability to share it in an interesting manner. Over the years of her religious life Mona continued to study and learn. As well as attaining her Matriculation and Teacher’s Registration, Mona had a Bachelor of Arts from the Queensland University, A. Mus from the London Trinity College and a Graduate Diploma in Theology and Scripture from Flinders University.

Mona’s last ministry was as Provincial Archivist, a role she really enjoyed and for which she was so admirably suited. Her love of the Congregation, sense of history, and literary skills were all put to good use as she delved into the stories of our Sisters and the journey of the Australian Province both here and in the mission countries.

Because of ill-health Mona joined St Joseph’s Aged Care Community in 2016 where she spent her final two years. Here Mona continued to be a most pleasant community member, with her sense of fun, her musical skills and interesting conversation. Mona retained her interest in local and world affairs and always had informed comments on news items. During the past months she had enjoyed playing for the weekly community sing-a-longs. The last two days of Mona’s life were spent making a retreat with other members of St Joseph’s community. What a beautiful preparation for her sudden but gentle meeting with the One to whom she had given all. When the Nurse came to check her at 10 pm on Thursday 6th December she was already with her Beloved in Heaven.

Thank you, dear Mona, for your life of love with us as a Daughter of Our Lady of the Sacred Heart. May you rest forever in the Heart of Jesus and sing your song of love to Him who captured your heart so long ago.