STATEMENT FOR THE CHIEF MINISTER BY VICAR-GENERAL, MALCOLM FYFE MSC 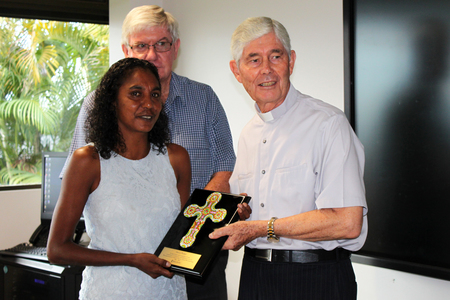 Bishop Daniel Eugene Hurley was born in 1940 and raised in the Flinders Ranges, the heartland of regional South Australia. He completed his Secondary school studies at Sacred Heart College, Adelaide.

After completing seven years of Seminary studies he was ordained a priest in 1964 and subsequently ministered in the Port Pirie diocese for 43 years (initially as priest and later as bishop).

While still a priest, he served as an Army and Industrial Chaplain, working part-time at the University of South Australia (at Whyalla) during the 1990s, lecturing in Australian Sociology, Philosophy and a post graduate program in Counselling. While working as a priest at Whyalla, Father Hurley established South Australia’s first regional ‘Centacare’ service.

For some time he served as a Member of the South Australian State Government’s Regional Development Council and was a member of the Regional Communities Consultative Council.

He was appointed Bishop of the diocese of Port Pirie by Pope John Paul II in 1999 (having worked there as a priest since 1964).

In 2000 he was a participant in the 2000 National Regional Summit and subsequently was invited to become a member of the Federal Implementation Committee. 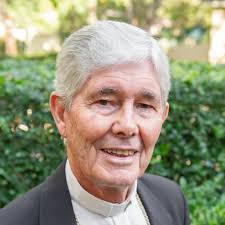 He was a member of the Australian Catholic Bishop’s Conference for the entire period during which he was in charge of a diocese (Port Pirie or Darwin).

Additionally, he is a member of the Minister's Council on Asylum Seekers and Detention. I understand that he is also a Patron of the Melaleuca Refugee Centre, and that earlier he established the Catholic Pastoral Care Team at the Woomera Immigration Reception and Processing Centre and used to be a regular visitor at the Baxter Detention Centre in Port Augusta. Later, in Darwin, he regularly visited the Detention Centres at Wickham Point and Blaydin.

In recent years, while still Bishop of Darwin, he was Deputy Chair of Caritas Australia and Chair of the Bishops’ Commission for Relations with Aborigines and Torres Strait Islanders.

Last year, he was appointed a Knight Commander in the Catholic Equestrian Order of the Holy Sepulchre.

About 3 years ago he sent his resignation letter as Bishop of Darwin to the Vatican in accordance with Canon Law which requires bishops to resign on reaching the age of 75. It is to Bishop Eugene’s credit that it was only very recently accepted (June 27, 2018).

That was the day when an announcement was made by the Vatican that Father Charles Gauci, at that time Administrator of the Cathedral Church in Adelaide, was appointed as the new Bishop of Darwin. (His Episcopal Ordination took   place on September 26. For the intervening period (between Bishop Charles’ appointment by the Pope and his episcopal ordination), Bishop Eugene was appointed Apostolic Administrator of the diocese by the Pope.

Bishop Eugene Hurley has been a tireless advocate and spiritual counsellor for the marginalized and forgotten people both of South Australia and the Northern Territory for more than 50 years as both priest and Bishop. He has been extensively involved in the work of the church with the disadvantaged and those in need of help.

He has promoted the welfare and status of aboriginal people throughout Australia, being an inspirational advocate and energetic worker to make real change in the process of reconciling our aboriginal and non-aboriginal peoples.

His involvement in the spiritual and social wellbeing of people in both South Australia and the Northern Territory and indeed beyond those borders over more than half a century has been outstanding and goes above and beyond the performance in the above areas of most others in comparable situations.

As someone who has worked closely with Bishop Eugene Hurley in the capacity of Vicar General of the diocese of Darwin over many years, I am able to add that Bishop Eugene is affable, accessible, user-friendly, highly intelligent and administratively competent. He is highly regarded as a Catholic Bishop by his more than thirty peers in the Australian College of Bishops as well as by Bishops of neighbouring countries.

His being recognised on the recent Australia Day Honours List with an AM was evidently well deserved. 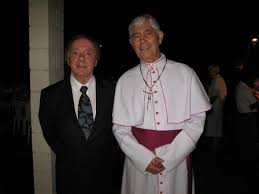